Online Budget Consultations: The next milestone in Democracy

Just like any social innovation, democracy is liable to change and make improvements over the course of time. Today, our democratic systems have the unique opportunity to be greatly enhanced by modern advancements in information and communication technologies. The potential for these technologies to support democratic decision-making processes can be realized in the form of what is called Electronic Democracy, otherwise known as eDemocracy. The application of eDemocracy can impact governance in both direct and indirect ways. From voters accessing the internet to inform themselves about a candidate to politicians using online engagement platforms to directly consult citizens on major policy issues; eDemocracy has all the makings of the next big milestone in the development of democracy.

An area where eDemocracy can have a significant impact on all levels of government is the budgetary process. Budgeting is arguably one of the most important activities that happen in the democratic governing process of a society, second only to elections. The administration of budgets directly impacts the well-being of communities so it is only fair that the voices of community members should have an impact on budget decisions. This is why it is so important that governments make use of eDemocracy tools in the form of online budget consultations and empower citizens to influence the spending of public funds. Budget consultations enable elected officials to receive direct and specific feedback from citizens on budget proposals and help plan future budgets while allowing citizens to help direct the allocation of funds in ways that reflect their needs. It is a win-win for both elected representatives and their constituents.

Currently, the predominant method of democratic participation practiced across the world has not fully embraced the possibilities of e-democracy and budget consultations. Voting in elections has been the main form of democratic participation in representative democracies. This governing system is not short of flaws, perhaps none more pronounced than its inability to consistently do what it proclaims to do; represent the peoples’ will. Politicians can easily lose touch with their constituents and fail to fulfill their mandate of serving the people that got them elected. Wealthy donors and special interests can have a disproportionate influence on governing bodies, effectively highjacking much of what democracy promises and aspires to live up to.

Alternatively, some propose Direct Democracy as a solution to many of the problems with the representative system. In a direct democracy, citizens make decisions on policy initiatives, leaving no room for governments not to represent the will of the people. This system promises greater government accountability, full transparency and in theory greater civic participation. But in practice, such a system has its’ own set of flaws: if every citizen voted on every issue this would be very time consuming and expensive. Also, it is possible that civic involvement might actually drop as a result of a kind of referendum fatigue due to the contentious nature of the issues and the extensive amount of participation required to arrive at a decision. What is needed is a combination of representative and direct democracy facets. E-democracy in the form of online budget consultations can achieve some of the benefits of direct and representative democracy. Fulfilling the promise of direct democracy to influence policy in a more direct manner while bypassing the concerns about fatigued voters, since government budgets only happen once a year. 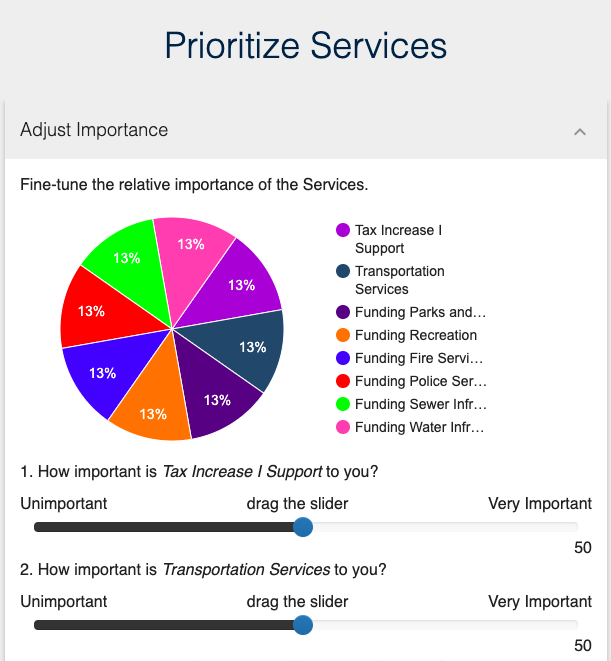 Online budget consultations are especially expedient if the goal is to increase the scale of civic engagement particularly among constituents in geographically dispersed locations. Being that the consultation is online allows for greater outreach than traditional town hall meetings can afford, which tend to favor a certain sector of the population that lives near the consultation venue. Budget consultations also present a unique opportunity for citizens to gain democratic and civic learning, as voters are exposed to budgetary scenarios that require them to analyze budget trade-offs and shortlist priorities.

A power tool to implement an online budget consultation is a budget simulator such as Citizen Budget, which has revolutionized the way of performing budgeting engagements. A budget simulator is a tool to involve citizens in complex budget decisions where it is often difficult to attain all of the desired spending outcomes without running into deficits and therefore requires making strategic trade-offs. Citizens gain an appreciation for the complex decisions elected representatives face and are empowered to express what they think is the best way of using public funds. While governments benefit from collecting citizens’ input as it provides them community buy-in and the insight to be responsive to the public’s views.

To be clear, an online budgeting consultation tool like Citizen Budget isn’t synonymous with Participatory Budgeting (PB), since PB has an explicit bottom-up connotation which states that governing bodies must adopt the final projects participants come up with. PB is a process in which municipalities allocate a certain amount of money, and ask the citizens to come up with proposals on how that money should be spent. Ethelo, the technology that powers Citizen Budget, can also be used for PB processes. The main difference is that PB has bottom-up initiatives (citizens build their own projects, propose them, and decide), and Budget Consultations come from the top-down (government consults citizens, and influence their decisions based on the citizen’s inputs).

The state of a democracy will most likely never arrive at a perfect manifestation of all its ideals; but of course, this does not mean we should not make improvements and reach for its’ horizon. E-democracy can be the next stepping stone towards this horizon and has the potential to make our democratic institutions more accountable, transparent and equitable. Engaging citizens with online budget consultation tools like Citizen Budget is beginning to tap into that potential by expanding our democratic practices. Budget consultations make our communities stronger and empower stakeholders to influence budget decisions while ensuring efficient public funding administration, and providing the social license governments need to implement projects.

About the Author: Andrea De Ascó